Products
To order any of the products below, please download this order form and mail or fax it to ICCFA along with payment. We will verify your JFDA membership before placing your order. 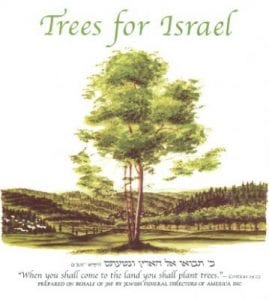 JFDA partners with the Jewish National Fund to offer members the chance to buy trees to be planted in Israel. So far, in its first 110 years, the JNF has planted 250 million trees; built over 1,000 parks and recreational areas; constructed new communities so that Jews from around the world have a place to call home; discovered new means for growing plants under arid conditions, bringing green to the desert; and built over 220 reservoirs and water recycling centers, increasing Isreal’s water supply by 12 percent.

JFDA members are able to buy tree certificates for just $10 per certificate. Use the Tree Certificate order form to purchase yours today.

Jewish law and tradition have endowed the funeral with profound religious significance. A Jewish funeral should in every respect express the dignity, sanctity and modesty of a solemn religious service. This Guide lists the basic requirements of a Jewish funeral. COST: $30 per pack of 100. 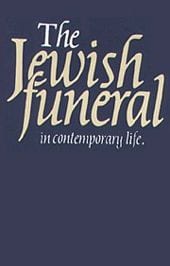 The Jewish Funeral in Contemporary Life

They are the essence of Jewish civilization. The essence that binds us together as a people. The essence that transcends our daily identity, whether we are Orthodox, Conservative, Reform or unaffiliated. And indeed it is these values that have their most moving expression in the Jewish funeral service. COST: $30 per pack of 100. 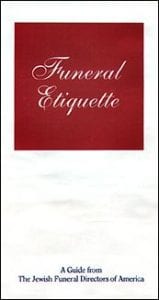 Published by the Jewish Funeral Directors of America.

The only thing more painful than enduring grief, is enduring grief alone. Often, however, we are at a loss when in the company of someone who has recently experienced a death in the family. We wonder what to say, how to say it, or even if we should say it. While our intentions are to console or comfort our bereaved friends or relatives, it is difficult to know the best way to do this. COST: $30 per pack of 100.

The Chain of Life

Prepared by the coalition for the Advancement of Jewish Education, Ron Isaacs, Susan Arlen, Richard Wagner Carolyn Starman Hessel, with the assistance of the Jewish Funeral Directors of America.

A Curricular Guide for Teaching About Death, Bereavement and the Jewish Way of Honoring the Dead. COST: $30 per pack of 100.

Offered by the Tri-Partite Committee, which is composed of the Rabbinical Council of America, the Union of Orthodox Jewish Congregations of America and the Jewish Funeral Directors of America.

A Yeshivah education should prepare its students for their future, giving them the opportunities to appreciate what halakha has to say and guide in all areas of life.. A study of the laws of mourning should be an integral part of that study, not only because mourning is unfortunately part of the inevitable human experience, but because it is an integral part of our living Torah. COST: $20 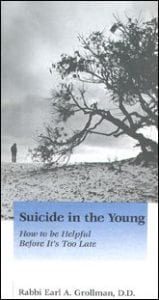 Suicide in the Young

How to be helpful before it’s too late.

This booklet is offered in the spirit of Jewish tradition with the hope that it may provide valuable insights for families to share at a most difficult time. COST: $30 per pack of 100. 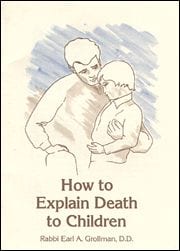 How to Explain Death to Children

This booklet is presented as a community service by the Jewish Funeral Directors of America, Inc. It is offered in the spirit of Jewish tradition with the hope that it may provide valuable insights for parents and children to share at a most difficult time in life. COST: $60 per pack of 100.

When Adolescents Face a Death of a Loved One

This booklet is presented as a community service by the Jewish Funeral Directors of America, Inc. It is offered in the spirit of Jewish tradition with the hope that it may provide assistance in healing for parents and adolescents at a most difficult time in life. COST: $60 per pack of 100.